The Nether is another dimension in the Minecraft world that can be reached from the Overworld by passing through a Nether Portal. It looks a lot like Hell: 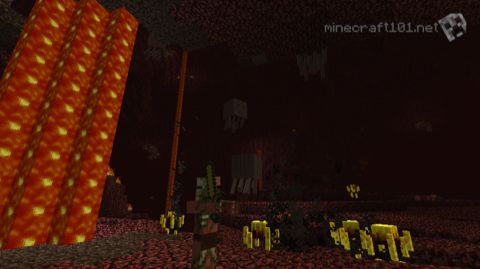 You'll have to venture into the Nether to get ingredients for brewing potions, the things you'll need to progress to the final boss fight of the game, and to collect blocks like Netherrack and Glowstone if you want to use them in your buildings.

In addition, The Nether provides a way to travel around your world more quickly.

Getting to the Nether

You will need to build a portal. When complete (remember to set it on fire), the portal will be filled with a purple glow and make an eerie noise. Step on to the portal and you will be transported to the Nether.

Blocks found in The Nether 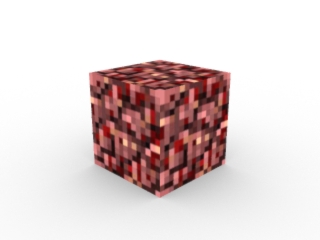 Netherrack is the main rock of the Nether. It's quite soft, and easily mined with a pickaxe. Netherrack is flammable, and will burn forever once lit, making it useful for beacons and other projects back in the Overworld. Furthermore, Netherrack can be smelted in a furnace to make Nether Bricks. 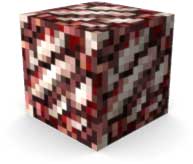 Hidden amongst the Netherrack you will find blocks of Quartz Ore, which can be mined to get Nether Quartz. Quartz is used in crafting certain Redstone devices, and also can be made into Quartz Blocks for building. 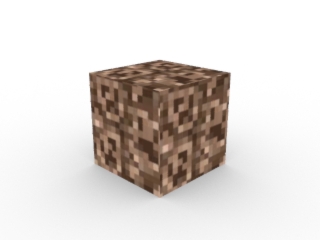 This is a strange kind of dirt-like block that slows you down as you walk over it. Soul sand acts as soil for growing Nether Wart, a plant that is useful for making potions. 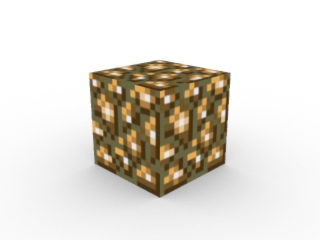 This is the main light source in the Nether. If mined with a pickaxe, you can collect Glowstone Dust, which is useful in potion-brewing, and can also be reconstituted to make Glowstone blocks, for use in lighting your home or office. 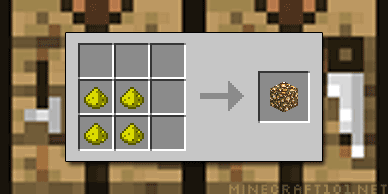 Glowstone is also an ingredient for crafting Redstone Lamps.

Other blocks found in the Nether are gravel, and lava. Lots and lots of lava.

Inhabitants of the Nether 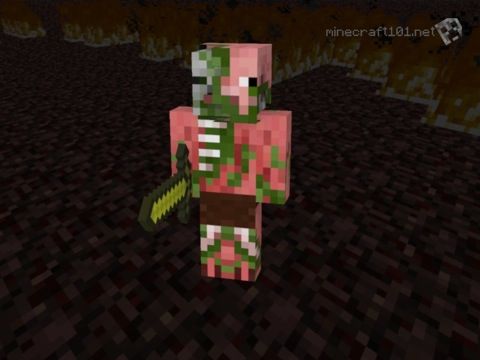 These guys won't attack you unless you attack them first; they just hang out in the Nether getting in your way. However, if you attack one his buddies will all get angry and attack you too.

If killed, a zombie pigman may drop a gold nugget (useful in potion brewing, although probably easier to obtain from normal gold bars), rotten flesh or a cooked porkchop. This makes them the only food source in the Nether (unless you have wood to make bowls for mushroom stew) although it seems rather weird eating something intelligent enough to weild a sword. 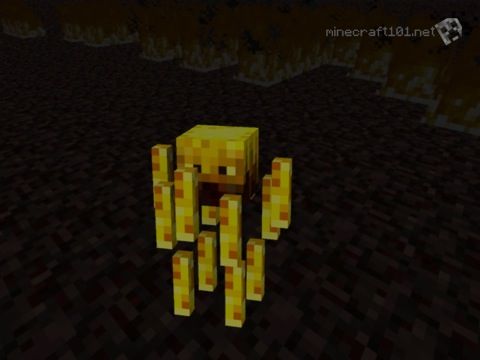 These hostile spirits will attack on sight by hurling fireballs. They're very dangerous, but you'll have to fight them to get their Blaze Rods, which are essential for progressing to the end game, and for brewing potions.

Blazes only appear from specific spawners, located in Nether Fortresses (see below). They will start to spawn when the player is within 16 blocks of the spawner. Ways to defeat them include running away so you can shoot at them from a distance, or building a wall with a gap at the bottom so you can hide behind it and yet attack their feet. 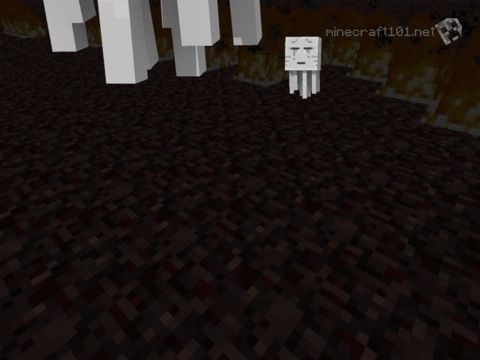 Ghasts are hostile mobs that float around in the Nether like enormous sad jellyfish. If they see the player, they will fire a destructive, exploding fireball. Unlike other mobs, they don't chase after the player; a ghast may fire a single shot then carry on on its way, or it may hang around and deliver a constant bombardment. You never know.

The best way to fight a Ghast is to deflect its own fireballs back at it, either with an arrow or by hitting it with whatever you have in your hands (the timing is easier with the arrow!). There's an achievement get for the first time you manage this.

When shooting at a Ghast, aim for the tentacles rather than the body. Ghasts are always further away than they look and this makes them hard to hit.

When killed, a Ghast might drop gunpowder, or a Ghast Tear, which is useful in potion brewing. As with Blaze drops, however, there's every chance that these will land in lava and you won't get them.

Ghasts' fireballs can destroy Netherrack structures. To make buildings Ghast-proof you must build them with stone imported from the Overworld. Ghasts can not see the player through glass, however, so they will not fire at you if you are behind it.

A Ghast's fireball can put out a Nether Portal if it hits it, so it's definitely worth enclosing your portals in a stone building. If you have no flint and steel to relight a portal, try and get the Ghast to fire at you again. A second fireball can relight the portal. 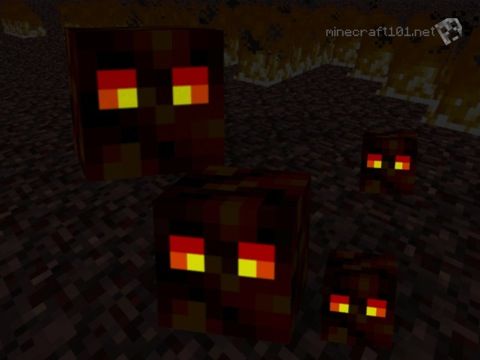 These cube-like critters resemble the slimes in the Overworld. The main danger they present is pushing you into lava. Like slimes, they come in three sizes, and killing a larger size Magma Cube causes it to break into smaller ones. 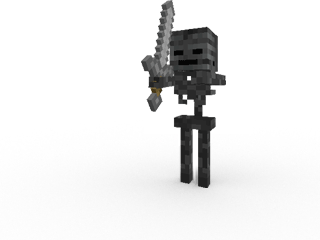 The Wither Skeleton is a larger, scarier version of the familiar skeleton mobs. These guys appear randomly in Nether Fortresses, and when they hit you they cause an effect called "wither" that is like being poisoned.

Sometimes, when you kill one, you can collect its head. When you have three, you can use them to summon a boss mob called the Wither.

These are large structures that exist in The Nether, forming huge bridges, towers and hallways made of a substance called Nether Brick. Who built these fortresses? Nobody knows. But there are two things of value that can be found here.

Nether fortresses contain rooms or platforms holding Blaze Spawners. You will want to come here to kill Blazes and collect their Blaze Rods. The safest way to do so is to build a wall with a gap at the bottom so you can attack their feet but they can't hit you with their fireballs. Bring plenty of food and armour for the construction project! 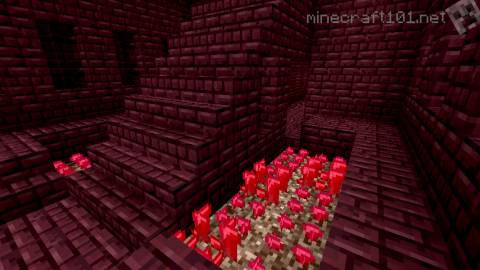 Sometimes you will find a room with a central Nether Brick staircase and a plant called Nether Wart growing to either side of it. Collect it all when you find it so that later you can build a plantation nearer your portal. Nether Wart is an essential ingredient for brewing potions.

Fortresses are made from Nether Bricks. You can also make Nether Bricks by smelting Netherrack in a furnace. Four Nether Bricks make a block, and these blocks can be further crafted into stairs, slabs and fences.

Using the Nether for Fast Travel

The Nether has a different scale than the Overworld, meaning it can be used for fast travel. The Nether is eight times smaller (or one eighth the size, if you prefer).

If you build a portal into the Nether, then travel 1 km (1000 blocks) and build another portal to get back to the Overworld, you will be 8 km from your starting point. This makes the Nether very useful for travelling long distances. A minecart railway going between Portals in the Nether can be a very efficient way to get around your world.

There is no water in the Nether, and you can't place water from buckets, except into cauldrons.

Beds explode if placed in the Nether; don't do it. Compasses and clocks don't work, they just spin wildly &emdash but at least they don't explode!.

It's never really dark in the Nether; the ambient light level is 8, about the same as a redstone torch.

If you decide to spend a lot of time in the Nether, you might want a local food supply.

These grow profusely in The Nether, but you'll need to bring your own bowls or wood to make them into mushroom stew. You will need to bring dirt and bonemeal if you wish to farm Huge Mushrooms.

Trees will grow (albeit in strange shapes) if you bring saplings and provide dirt and light. Because there is no water in the Nether, sugar cane, melon and pumpkin will not grow, and wheat will only grow slowly.

Chickens can be raised in The Nether if you bring them in the form of eggs.

Nether Wart can be planted on Soul Sand. It has three stages of growth. Harvesting mature Nether Wart will get you more back than you planted. This is essential for brewing any of the useful potions.