Mushrooms are an excellent food source. They can be grown anywhere without water, and are the most nutritious food for vegan miners. 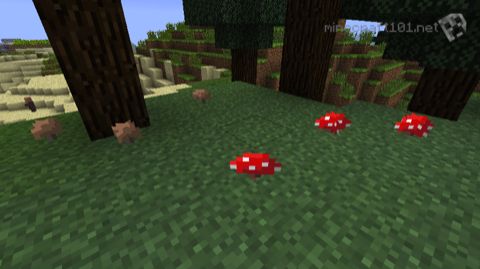 To make mushroom stew you need both red and brown mushrooms. Both can be found growing in many places, especially underground in caves and in swamps. Mushrooms are also very common in The Nether.

Mushrooms can be planted on almost any surface that is not too brightly-lit (ie. not under direct sunlight, and at least 2 blocks away from a torch or other light source).

Mushrooms will slowly spread to nearby dirt blocks, as long as there are no more than 4 mushrooms of the same type in a 9x9 square. Therefore, a very spread-out mushroom farm in which one red and one brown mushroom are placed at widely-spaced intervals is somewhat practical. 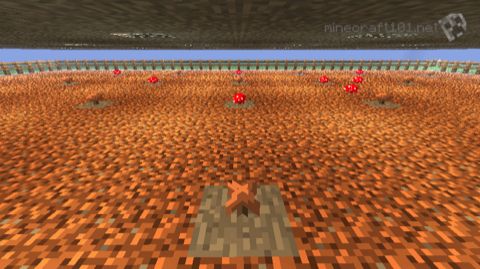 This mushroom field has a roof to keep the sun off, and recessed lighting to prevent mobs from spawning. Mushrooms are planted 5 blocks apart in an alternating pattern of red and brown. Mushrooms can be planted on almost any block, but will only spread to dirt. 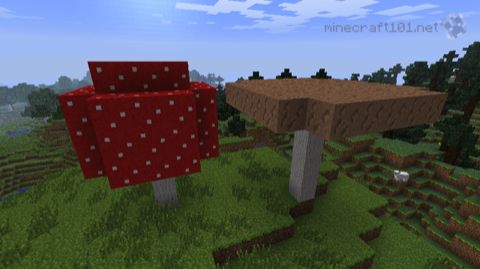 If you fertilise a mushroom by applying Bonemeal, it will sprout into a Huge Mushroom. When harvested it will yield up to 20 mushrooms. This is the most efficient way to farm mushrooms.

The mushroom must be planted on a dirt or grass block. You will need a lot of space.

When planted, right-click with bonemeal.

The mushroom can be harvested with a sword or other tool. Each block has a chance of producng a mushroom whe destroyed.

It is possible to build mushroom farms in the form of towers that have a stack of mushroom-growing floors, that are harvested at the push of a button. One good example is described here.

Growing Mushrooms in the Nether

Mushrooms are commonly found in the Nether, but do not spread over Netherrack. The best way to grow mushrooms there, then, is to bring some dirt and bonemeal from the Overworld and use the Huge Mushroom method.

Mushroom Stew is made by combining one red mushroom, one brown mushroom, and a wooden bowl. 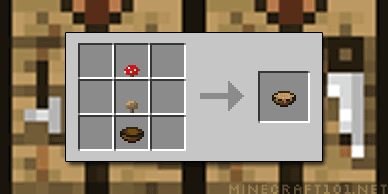 Note that the ingredients can be stacked in your inventory, but the stew can not.

The ingredients can be placed in any shape on the crafting area, so you do not need a crafting table to make the stew.

Mushroom biomes are proof that late nights and too many mushrooms can do strange things to a game developer. They are places where Huge Mushrooms grow, and where strange cow-like creatures called Mooshrooms live. 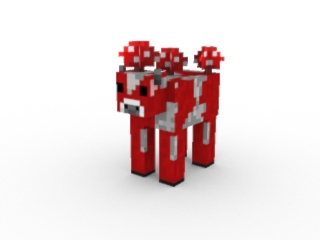 Mooshrooms can be sheared with a pair of shears, just like sheep, and provide mushrooms. They can also be 'milked' by right-clicking on them holding a wooden bowl. Instead of milk, however, you get mushroom soup. I am not making this up.

Mycelium is a special block similar to grass, that is only found in mushroom biomes. Like grass, mycelium will spread to cover adjacent dirt blocks. Mushrooms grow faster on mycelium and survive higher light levels than they do on other blocks. If you make a mushroom farm, it would be wise to use mycelium.

However, like grass, the only way you can dig up a mycelium block and carry it to your farm is with a tool enchanted with Silk Touch.

How to find a Mushroom Biome

Mushroom biomes are rare, and usually exist as remote islands in the ocean. However, if you just want to see one, here's how:

You should find yourself near a small mushroom biome.