The End is an eerie world you can reach by activating and passing through an End Portal in a Stronghold.

The first part of The End that you will encounter is the Central Island; a floating island made of a greenish substance called End Stone, and featuring a circle of obsidian pillars called End Spikes.

At the top of each spike is an End Crystal. Two of the End Crystals are enclosed in iron cages.

Atop each End Spike is an Ender Crystal.

The End is populated with Endermen. Lots of them! Don’t look at them, or they will attack. (You can wear a pumpkin on your head to prevent this).

There is also a boss mob called the Ender Dragon. This powerful enemy will attack you, and is hard to kill because it constantly receives healing from the Ender Crystals.

If you wish to defeat the Ender Dragon, you must destroy the crystals first. Even then it will be a hard fight, so go prepared.

If you manage to defeat the Ender Dragon, it will activate the Exit Portal to allow you to return to the Overworld.

Another kind of portal will also open…

End Gateways are your route between the Central Island and the Outer Islands of the End. To pass through a Gateway, throw an Ender Pearl through it and you will be transported to an Outer Island.

When you use the End Gateway, you will find yourself on the Outer Islands. These floating islands are made of Endstone, and populated by Endermen. Unlike the Central Island, they are also home to weird plants called Chorus Plants.

Travelling around the Islands

To get around the islands, you can either build bridges from one to the next, or teleport yourself by throwing Ender Pearls. Either method is very dangerous, so why would you risk it? Well, there’s lots of stuff on the Outer Islands of the End that you can’t find anywhere else.

These strange plants grow all over the Outer Islands. When you break one, the whole plant will collapse giving you a number of Chorus Fruit.

Chorus Plants also produce Chorus Flowers; you can collect these by picking them from to the top of each stem, before you break the whole plant down.

To grow your own Chorus Plants, you can plant a Chorus Flower on an Endstone block, and it will slowly grow. You can do this in the Overworld, nether or End, and light is not needed.

Chorus Fruits are dropped when a Chorus Plant is broken.

You can eat them, but in addition to restoring hunger points, they will cause you to teleport a short distance. This might save your life if you run into a Shulker - if you find yourself floating into the air, eating a Chorus Fruit will teleport you back to the ground.

Although Chorus Fruit is a food, when you cook it it becomes a crafting ingredient. 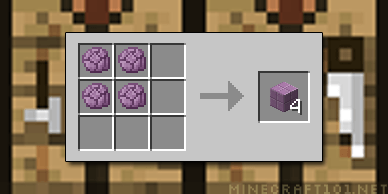 End Cities can be found in the Outer Islands of The End, but they are very rare and you may have to travel a long way to find one.

In an End City you will find chests full of treasures, guarded by formidable mobs called Shulkers.

End cities are lit by a new light source called an End Rod. If you want to make more of these they can be crafted from Popped Chorus Fruit and a Blaze Rod.

The best End Cities also have an End Ship…

Some End Cities have End Ships floating nearby. On an End Ship you will find more Shulkers and more treasure. Each End Ship has a treasure room where you will find an Elytra .

An Elytra is a cape that can spread out like wings and allow you to glide. TO use an Elytra, equip it by placing it in your chest armour slot in your inventory screen.

To start gliding, press Jump when you are in mid-air (jumping or falling), and then you can control your glide using the mouse.

Elytras will wear out as they are used, and eventually will be too worn to be used. You can repair them on an Anvil using Leather. If you use your Elytra a lot, you might want to apply an Unbreaking enchantment.