Slabs are half-height blocks that can be made from wood, stone, stone bricks, cobblestone, sandstone, quartz, bricks or nether bricks.

The recipe is always the same, only the materials change: 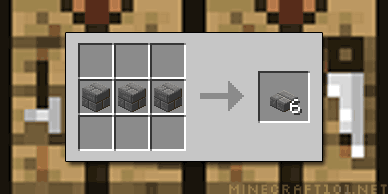 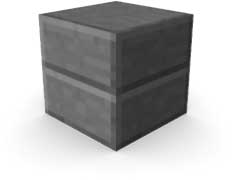 Slabs can be placed in either the top half or bottom half of a block.

If you place one slab on top of another, the two will combine to look like the original block they were made from, with the exception of stone slabs which make a distinctive double-slab block.

Bottom, top and double slabs in a variety of materials (click to enlarge).

TIP: Mobs do not spawn on bottom-half slabs, making them a great idea if you want to put a flat roof on your building. However, they will spawn on top-half or double slabs so place torches wherever you use those. 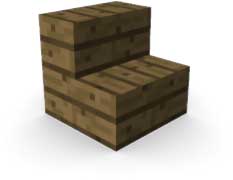 Stairs are useful for the obvious purpose: allowing you to go up and down slopes without jumping. They are also used to make slopes, such as the roofs on houses.

Like slabs, stairs can be made from wood, stone, stone bricks, cobblestone, sandstone, quartz, bricks or nether bricks. The recipes are the same for each material. 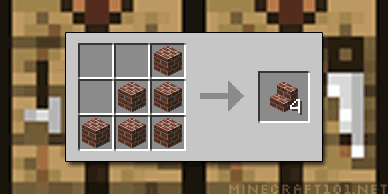 And like slabs, stairs can be placed in either the top or bottom half of a block.

Stairs placed in the top half of a block will be upside down. These stairs are not functional, but they look good if they’re used for arches and the like.

Stairs placed next to each other will also form corner stairs, depending on how you place them.

Fences and Walls are made from wood and cobblestone respectively. They are one and a half blocks high, so players and mobs can’t jump over them, and when placed they attach themselves to blocks that are next to them.

Making fences requires both sticks and wooden planks. The planks must all be of the same type of wood and determine what colour the fence will be. (The sticks can be made of any kind of wood.) 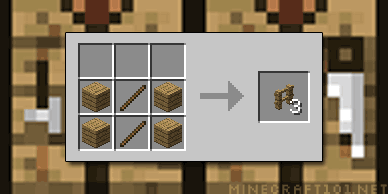 Walls are simply made from cobblestone: 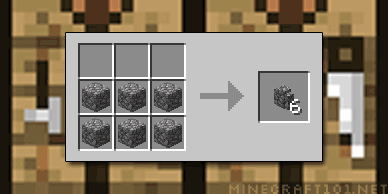 If a fence has nothing next to it, it will just form a vertical pole.

Cobblestone walls form columns at junctions, or if you place something (such as a torch) on top of them.

Fence gates are doors that go in fences or walls! Just like doors, they are too tall for mobs and players to jump over. Fence gates can be made from any kind of wood: the recipe is sort of the opposite of a fence recipe. 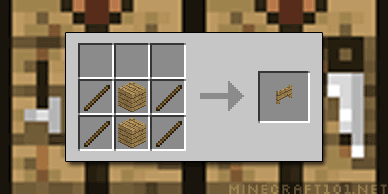 TIP: On "Hard" difficulty level, zombies can open wooden doors, but not gates. Placing a gate outside your door will stop them getting in.